You know you live in the most lefty-radical part of Madison when you get a Super Bowl invitation that says “Come commiserate over the fallacy of community that is NFL Sports.”  It’s worth a chuckle but I’m hardly miserable.  I’m a Green Bay Packers fan and I plan on cheering them on in tomorrow’s Super Bowl XLV. 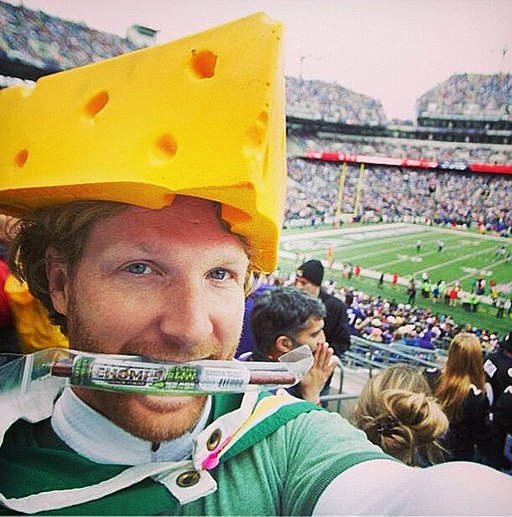 (Note to Super Bowl marketers–you really should have ditched Roman numerals for the standard Arabic ones somewhere around Super Bowl 30.  I can read Roman numerals of course, but for any Roman numeral above 30 I have to stare at it for awhile before I’m able to figure out which Super Bowl you’re talking about).

When I moved to Wisconsin I was initially on the fence about whether to switch my allegiance from the Bears to the Packers, but decided to do so after watching a Monday night football game between the two teams at the newly renovated Soldier Field in Chicago (the once-beautiful stadium that now looks as if an alien ship has landed on the Acropolis).  It’s funny, because soon after I moved to Madison at the end of 2002, I began to hear rumors of Brett Favre’s possible retirement and I worried about the possibility of not being able to see him play.  Eight years later, he seems to finally be retiring for good, and Packer fans have all but forgotten him due to the success of new quarterback Aaron Rodgers.

But given that Green Bay is 122 miles away from Madison and that the Green Bay Packers seem to be the official state religion of Wisconsin, it seems like I would have good reason to want to avoid the hype. But the more I know about them, the more I like them.

The first thing I noticed about Packer fans was in the way that they took the “cheesehead” moniker–originally a pejorative label given to them by people in neighboring states–and took ownership of it in a humorous way that only Wisconsinites could do.  The foam “cheese wedges” that Packer fans put on top of their head may now be an old joke, but it was and is quite funny.  It is a classic example of the Wisconsinite sense of humor, which I’ve always admired.

Just as the New York Yankees have a deeply ingrained history of winning championships, so do the Packers. While they’ve only won three Super Bowls (their opponent tomorrow, the Pittsburgh Steelers, have won six), the Pack have won more NFL championships (including pre-Super Bowl championships) than any team, with twelve under their belt.

I also found it interesting that the Packers have remained in Green Bay despite the fact that it is a tiny city half the size of Madison.  They hearken back to the time when the Chicago Bears were known the Decatur Staleys, when small-town football clubs like these were common.  There are several reasons the Packers have been able to stay in Green Bay.  One is the depth of loyalty Wisconsinites have to the team–deep enough that people are willing to road trip from all over the state to attend a game.  The Packers have one of the longest waiting lists for season tickets in professional sports–the number of people on the list exceeds the number of seats in Lambeau Field.  The fact the the NFL shares TV revenue between franchises also helps–this way the big market teams (like the New York Yankees) aren’t more likely to dominate.

But another big reason is that the Packers are the only non-profit community-owned major league sports franchise in the country.  The amount of stock in the team that someone can own is limited, and if the team were sold, all of the proceeds after expenses would have to go to a specific charity, so any financial incentive for stockholders to sell the team is erased.  Stock sales funded the building and later rehab of the Packers’ home stadium of Lambeau Field, and there are currently over 100,000 shareholders owning between 4 and 5 million shares of stock in the team.

In an era of big money and huge profits in professional sports, this is deeply refreshing.  Of course, player salaries are no lower than other NFL teams, and tickets and team merchandise are no less exorbitant than elsewhere–as much as I’d like to wear a Packers jersey for tomorrow’s Super Bowl, I’m not willing to pay $70-80 for one.  But the fact that the team is non-profit organization owned by the fans is admirable.

It is also fitting for a Wisconsin team to be organized in this way.  Wisconsin, like Iowa and Minnesota, have very deep-rooted histories of cooperatives, which is why they were recently ranked third, second, and first respectively out of all U.S. states in total co-op business volume (California is ranked fourth) despite being ranked 18th, 30th, and 21st in total state population.

So it is with enthusiasm that I will be joining fellow cheeseheads in rooting for a Packer victory. The Capitol Dome in Madison has been lit green and gold.  While some people (like the writers of the invitation I mentioned at the beginning this post) might get sick and tired of all the Packer hype, I’m perfectly fine with living it up.